Blondin’s Exploits
Witness Accounts from the Time
and Other Anecdotes
Historic Anecdotes: 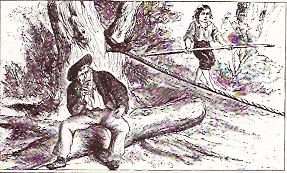 ‘An old sailor made young Blondin a present of a piece of boat’s cable, and himself
fastened it for the brave tyro… ’ [Banks, “Blondin”, 1862]

Blondin himself started in the circus. The famous tightrope-walker Gabriel Ravel adopted him as a son, which compensated in part for his raplatie (earth-bound, non-circus) origins. But it didn’t last. Circus routine couldn’t quench his thirst for glory and he longed for freedom. In possession now of an infallible hire-wire technique, he felt lost and underestimated among all the other acts. Without realising it, he was embarking on a lifetime’s search for the heroism of Napoleon’s wars he used to hear about at his Father’s knee. It was a folie de grandeur which his strength of purpose would turn to glory. A hero stands alone. He knew that. And so he left the circus forever.

To make the most of Blondin’s ability the most impressive site is called for. It will have to be wild, it will have to have water, and it will have to be gigantic. The Niagara Falls is the obvious location. In the spring of 1859 Blondin and his manager Colcord, visit the small honeymooning resort, check into one hotel and start measuring. At first the locals can’t believe what they hear about the peculiar Frenchman and his friend. But as the scaffolding goes up they realise something big is afoot and start making their own plans to cash in on it. Benches, tents, food stalls appear. Bets are taken as to the likely outcome of the event. People pour into the area on special steamers. The whole place is completely transformed to accommodate an audience of thousands. Blondin is to cross the river in front of the cataract, at a height of two hundred feet. The massive rope, eleven hundred feet in length, is secured every eight feet by sway wires anchored to boats below as well as to the shore. The whole thing looks like some kind of tremulous bridge, but it is a bridge only one man may cross.

‘All the beauty and fashion of the States has assembled to witness him; some of those coming over two hundred miles to observe his performance. To look at the preparations was enough to make a man grow sick and faint. A slender cord, more than 1000 feet in length, at the height of nearly 200 feet, was suspended over the boiling fluid. Everyone seemed gay and happy: no one thinking of the horrible fate that might await the daring man that had to cross that narrow channel… One moment of uncertainty and fear, and then all would be over.’ [A Witness of Blondin’s Niagara Feat]

When Blondin made his appearance, the crowd greeted him with vehement cheering. The bands struck up a gay march, and Blondin set out on his perilous journey. I did not know which to admire most, the daring of the attempt, or the ease and elegance of the performer in crossing the narrow thread that separated him from the gulf beneath. He is a little wiry man, with strongly marked features, indicative of the most determined resolution. When about half-way across he stopped in the centre of the rope and waved his plumed cap to the spectators, who cheered him lustily. He stood thus for some minutes and then laid his pole upon the rope, and stood upon his head. Every heart felt cold with terror at witnessing his performance. Eyes turned away, and a pallid hue seized upon every countenance, except that of the gymnast. He then threw a somersault, and taking up the pole finished the journey, reaching the opposite side in a very short time.’ [A Witness of Blondin’s Niagara Feat] 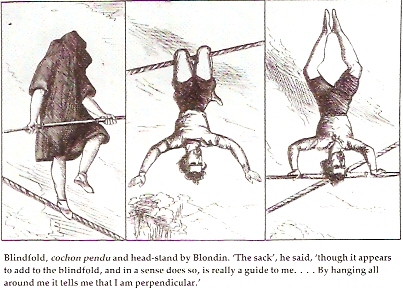 ‘On his return to American soil, the enthusiasm of the onlookers knows no bounds. He is cheered, surrounded, his hands are pressed. Everyone wants to see or touch the great man, talk to him, give him some proof of their admiration. In the midst of all the excitement Blondin alone maintains his sang-froid. Nothing in his face or voice betrays the slightest emotion. He couldn’t look more relaxed in the most ordinary of situations. Finally the most enthusiastic of his followers carries him through the crowd, whose cheers come even louder. Then he is driven to the village in a car, followed by about twelve thousand people.’

‘It must be said that along with General Lafayette and the aeronaut Godard, this Blondin is the Frenchman most admired by the American nation.’ ‘It is useless: you cannot describe Blondin, any more than you can describe Niagara; both are stupendous and baffling, I hardly know which is the more so.’ [From Accounts of Blondin’s Niagara Feat] 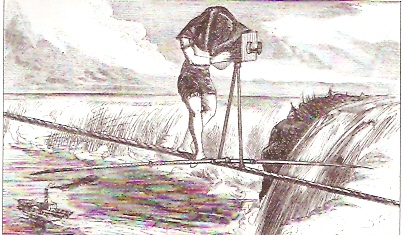 ‘Blondin offered to cross the Niagara with a man on his back, but no one volunteered. He entreated them but to no avail, saying that he had come here, being announced to do so, and he did not want to disappoint the public. The barrow was prepared and all ready, but no one offered. Then his own agent, Harry Colcord, undertook to go across with him, and he did so smoking a cigar all the way. I had quite enough of it this time, and was glad to find my way back. [A Witness of the Niagara Feat] 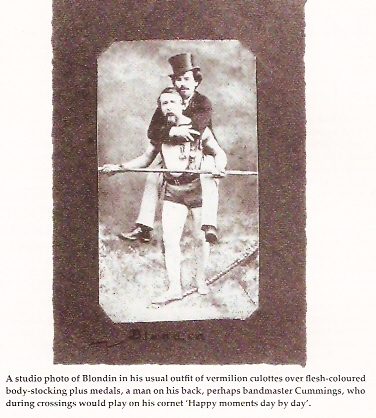 One day Blondin hauls a chair and table up from the boat below and has his lunch sitting down. Another time he hauls up an oven, a frying pan and some eggs. He lights the oven, breaks some eggs into a pan and makes an omelette which he then eats. A witness reports that Blondin ‘leans out over the abyss like a gossip who pokes his head out of a window to talk to someone on the pavement. Now the “Maid of the Mist” [boat] arrives below him. The captain attaches a bottle of wine to a thread, which Blondin pulls back up again. Waving to the twelve thousand onlookers, he drinks to their very good health and hurls the bottle into the river. Now he continues his way to Canada, arriving there exactly nineteen minutes after leaving the American side. The hurrahs, bravos and clapping which greet him when he steps onto firm land, drown for several moments the great voice of the cataract itself.’ [A Witness of Blondin’s Niagara Feats] 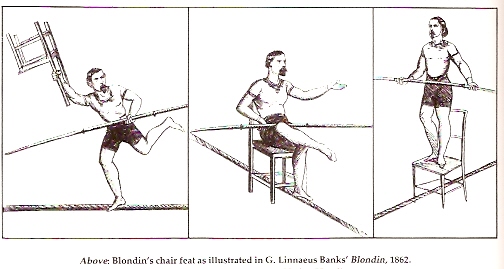 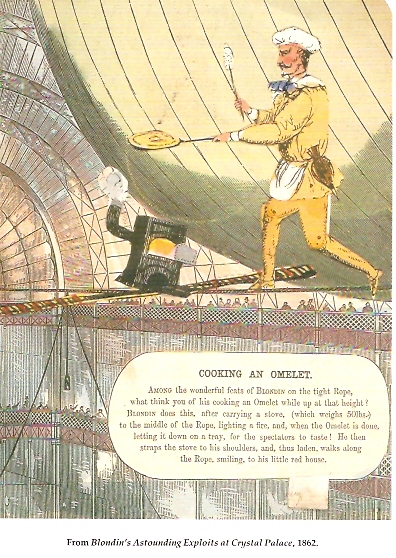 One day the Prince of Wales himself is present. He is visiting Canada, so naturally he must see the hero of Niagara perform. It will become one of Blondin’s favourite anecdotes. Arriving on the Canadian bank, the funambule pays his respects and enquires whether he might be permitted to bear the Prince across the river to the American side. The Prince thanks him for his generosity but regrets that his rank obliges him to stay on the shore.

Blondin ‘laying’ on the rope 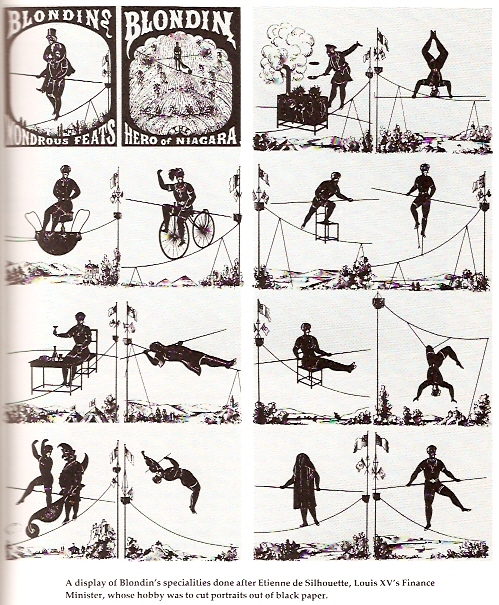 Blondin’s show in the [Crystal Palace, London] building now demolished was a triumph. He hung his rope across the great arch of the building, a hundred and seventy feet from the ground. The rope was rumoured to be the same one he used at the Niagara Falls, so many of the visitors ruthlessly helped themselves to souvenirs from the great coil of surplus rope.

At Crystal Palace in 1862, only one shadow passes momentarily across his sun, the day Blondin wheels his five year old daughter onto the rope in a barrow. Like the flesh coloured tights of Madame Saqui, it causes a scandal. The sentimental Victorians protest. The impudent Frenchman! Blondin has to stop and wheel a puppet instead. 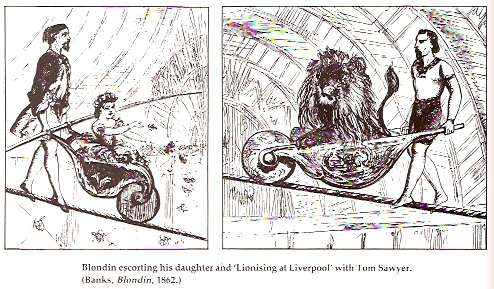 Well-known Acton character, Mr. John Charles Gee, better known as ‘Charlie Gee’, proprietor of a laundry, died in England towards the end of August. There are records of the Gee family in Acton as far back as the 17th century. Mr. Richard Gee, Charlie's father, had 30 children, of whom 'Charlie' was the 19th, and the only survivor at the time of his death. The family was scattered all over the world. Richard Gee was, according to his son Charlie, the owner of Springfield Park, a large estate now covered with villa residences, which he lost one night at a single game of cards.

When 'Charlie' was born his people were running a large green grocery store in the village of Acton, and he had to start earning a living early. He became in turn: a newspaper boy at 1/6p per week, a stable lad and groom, and, after trying many other occupations, he joined the City Police in 1874, retiring in (unknown). Before joining the police Mr. Gee was noted for his practical jokes, essentially good-natured and dangerous chiefly to himself. He fell unhurt on to some bushes from he roof of a high house on which be had trespassed. Bumped an old parishioner, weighing 21 stone, on a boundary stone during the beating of the parish bounds. Defeated, before an admiring crowd, two local bruisers, one of whom was renowned as the village bully. Locked the local notabilities in the tower of the parish church on the occasion of a local public funeral.

For a wager, Mr Gee once ate a dinner consisting of a Dover sole, an 8lb leg of mutton, 2lb of potatoes and a big helping of turnip greens and turnips. This last feat was achieved at the Mill Hill Tavern, Acton, in 1873. Also for a wager he held up, at the risk of his life, a train for nine minutes at a level crossing - for this he was prosecuted, but was let off lightly by the Magistrates. Mr. Gee once played the part of an amateur detective, and recovered a large sum of money for the local authorities.

The crowning achievement of his life occurred at the Crystal Palace on October 4, 1869, when Blondin took him over the high tight-rope strapped to his back, Blondin himself riding a bicycle.
Longest Ride of Life:

'It was,' said Mr. Gee at the celebration of the jubilee of the event, 'the longest ride I ever had. The slightest mistake  on Blondin's part, the slightest movement on mine, and - domino! Blondin wanted to take me back the way we had come over the heads of tens of thousands of people, but I refused.'

Only three weeks before Mr. Gee had won the championship and the gold medal of the International Velocipede Association, doing the three-mile course at 18mph. His cycle was of wood, with iron-tyred wheels and no chain. He rode as a gentleman expert, in velvet tail coat, white buckskin breeches and patent leather top boots. He is one of the pioneers of cycling. For 56 years in succession, Mr. Gee attended the Derby, on most of the occasions wearing the costume in which he had formerly cycled. 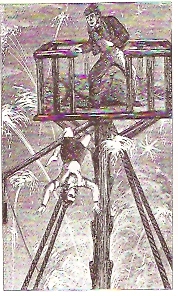 Blondin once missed his step and held on by the crook of his leg while
fireworks exploded around him. (Location unknown)